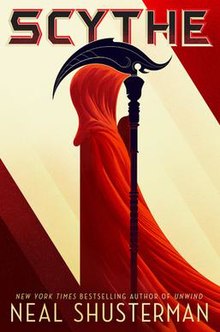 In a future world where all hunger, disease, war, misery, and even death have been conquered, to keep the population from exploding and becoming unsustainable, the scythes are the only agents with the legal authority to kill people. Teens Citra and Rowan are chosen to be apprentice scythes, a role neither wants, but they have no choice--if they do not master the "art" of ending life, they might lose their own.